Several people have asked about possible follow-on activities from the GameLab sessions on HADR operations and Haiti earthquake relief that were featured at the Connections 2012 interdisciplinary wargaming conference. Indeed we do plan to put together a group to refine game designs, and hopefully produce a playable prototype for Connections 2013 later this fall, and I’ll post an announcement here when we have the details. For now, however, the new academic year starts this week, and I’m a bit busy! 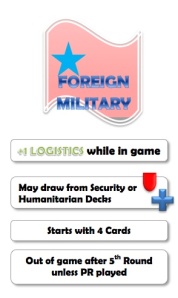 In the meantime, I’m pleased to report that GameLab has already given birth to an educational card game that is now being used, specifically in a World Bank course on strategic coordination in crisis response. Designed by Gary Milante (also known as “GameLab Group Facilitator Alpha”), the game uses some of the ideas and themes raised in the GameLab session, but adapts them to a simple and fast-play card game mechanism.

You will find further details—and links to the files necessary to play test your own version—over at PAXsims. The initial design is likely to undergo further revision, so comments are welcomed.