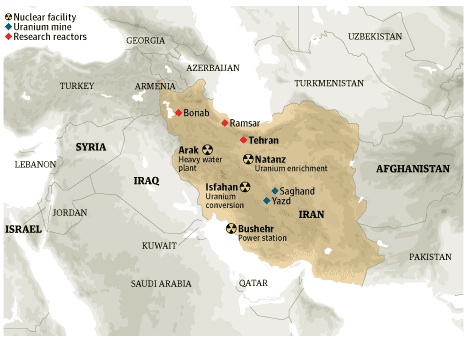 Given Paul’s last post on Persian Incursion, I thought it might be useful to pull together a summary of recent serious wargames regarding a potential Israeli (or US) strike against Iranian nuclear facilities. For obvious reasons, this list only includes those games that are in the public domain. If I’ve missed anything, feel free to add additional references in the comments.

Reported outcome: No attack, with the US unwilling (and pressuring Israel not to), and Russia and China opposed. Iran continues existing program.

Comment: Walt offers some critical thoughts on the game’s design, and the implications of those shortcomings for its external validity.

Comment: The initial military scenario, which involves Israel establishing temporary airstrips for refuelling its strike missions on Saudi soil without Saudi permission seems particularly unrealistic. Modern high performance combat aircraft don’t take well to operating on rough desert landing strips, Saudi ISR and interception capacities are far from negligible, there’s very little topographical cover or radar shadow in northern Arabian, and—whatever its support for a strike against Iran—Riyadh would be outraged if its soil were used for the purpose. It would be a disaster waiting to happen. Hamas retaliation at Iran’s behest is pretty unrealistic too.

Comment: Lots of worst cases strung in a row.

Comment: Michael notes that Iranian retaliatory options (against non-Israeli targets, or using allies and proxies) are limited by the game design.

See also: Brant Guillory’s video report on a modified game of Persian Incursion (with additional fog of war) at Origins War College (via BGG), and my own play test/game report (at PAXsims).

Since posting this, I’ve also come across a 2006-07 simulation and modelling exercise by the Heritage Foundation that looked at the consequences of a short-term Iranian closure of the Straits of Hormuz following a US strike against Iran’s nuclear facilities. In the first run closure had significant economic effects, including an $85/barrel increase in oil prices and a $161 billion hit to US GDP. In the second run these effects were mitigated by a variety of US policy responses (some of which—like relaxing environmental regulations—seemed to have more to do with the Heritage Foundation’s generic policy preferences than managing the short- and medium-term effects of managing a spike in world oil prices).

Reported outcome: Israel conducts air strikes against Iranian nuclear facilities. Iran retaliates with limited ballistic missile attack on Israel. Iran pressures Hizbullah and Hamas to attack israel, but they are reluctant to do so. Iran generally plays it cool (and it is criticized by domestic opposition for inaction). US presses for ceasefire, but Israel decides to launch second strike anyway, resulting in (accidental?) US shoot-down of an Israeli F-16 over Iraq.

Comment: While US shoot-down of an IAF aircraft is very unlikely, the prospect of a calm Iran playing an israeli strike for diplomatic gains is an interesting one.

Reported outcome: Iran tests a nuclear weapon in 2013, and grows more assertive in the region, including low-level attacks against US vessels and demands for changes in the border with Iraq. US urges Israeli restraint. Saudi Arabia develops its own nuclear program. Egypt proposes military action against Iran. Turkey is cautious, and considers withdrawing from NATO if Israel joins.

Comments: I am unconvinced that a (presumably) Muslim Brotherhood-led Egyptian government pushing military action against Iran, notwithstanding Gulf preferences or Sunni/Shiite differences. NATO expansion to include Israel seems deeply unlikely barring resolution of the Palestinian issue. It isn’t clear why Iran would want to undermine its allies in Iraq. However, Saudi behaviour rings true. I wonder what they assumed about Syria in 2013-continuing Iranian friend or post-Ba’thist foe?

Comments: At present, both US and Israeli intelligence seem to concur that Iran has not yet made a decision to develop nuclear weapons. The wargame therefore doesn’t address the most difficult issue—would an attack lead Iran to abandon its current nuclear research and development, or would it convince Iranian leaders to make a full-out effort develop a weapon so as to deter any future attacks?

Reported outcome: Israel attacks Iranian nuclear facilities on the eve of US election, losing ten aircraft but inflicting heavy damage. Iran retaliates by massing troops on Iraqi border, encouraging Hizbullah rocket attacks against Israel, suicide bombings against Israeli targets, and a low-level “dirty bomb” attack against Tel Aviv. The Obama Administration is initially reluctant to support what it sees as an unwise Israeli action, a position for which it is heavily criticized by the Romney campaign. As hostilities escalate still further, including a shoot-down of an Israeli airliner, the US increase pressure on Iran for a ceasefire.

Comments: The dirty bomb (even if it caused negligible casualties) would be something that would provoke considerable Israeli escalation, I think. A move by Iran to create a wedge between Washington and Israel by offering the US oil seems unlikely. The game also doesn’t model one of the really critical issues—namely whether a strike might convince Iran to move ahead with weapon development. However, in general the scenario seems as realistic as many others, despite being organized by a small Israeli tabloid.

Reported outcome: Iran, which has begun work on HEU enrichment and a nuclear weapon design, retaliates against covert Israeli and US campaign against its nuclear program with terrorist attack against US nuclear scientist and tourist hotel in Aruba. US retaliates with airstrike against IRGC base in Iran. Iran retaliates with low-level mining of Straits of Hormuz. US then launches major military operations both to reopen strait and destroy Iranian nuclear facilities.

Comments: Ignatius’ major take-away from this one (as a participant/observer) was the way in which limited retaliatory measures may not be perceived as such by opponents, and lead to escalation. At PAXsims I agree, but also wonder about a few of the actions apparently taken in the game, and also ask whether it wasn’t pre-loaded with an escalatory scenario.

Reported outcome: Sadjadpour and Hounshell suggest that an Israeli strike is only partially successful; Congress and the Romney campaign places political pressure on the Obama Administration to fully endorse Israel’s action; the column ends with the Administration still juggling how to respond. Moaveni envisages a limited and rather indirect Iranian retaliatory response, coupled with rocket attacks against Israel by Hizbullah and islamic Jihad. Iranians, angered at the attack, rally behind the regime, increasing domestic support for Iran to develop a nuclear weapon.

Comments: Rather than reporting the results of a crisis simulation or wargame, these two op eds instead each outline one perspective on the possible ramifications of an Israeli strike.

Reported outcome: Participants roleplaying members of the National Security Council Principal’s Committee discuss the various risks and policy challenges to the US of a hypothetical Israeli attack against Iranian nuclear facilities. They conclude that the attack puts US citizens at risk of Iranian retaliation, that it may actually complicate efforts to prevent Iran from obtaining nuclear weapons, and that there is substantial chance of the US getting dragged into the conflict.

Comments: More of a role-play/policy options exercise than an actual wargame. Excellent group of participants, even if the simulated Chairman of the Joint Chiefs of Staff seems a little over-eager to go to war. Valuable insights into the policy dilemmas that would face US decision-makers.

Truman National Security Project, “Tell Me How This Ends” (October 2012)

Reported outcome: An online multimedia simulation in which the player assumes the role of a US President who has decided to attack Iran’s nuclear facilities. The situation escalates as Iran responds. In the end, the US is left with three choices: invade and occupy Iran; maintain a robust military presence in the Gulf and bomb Iran from time-to-time; or withdraw.

Reported outcome: Israel strikes Iranian nuclear facilities, and follows up with second strike 24 hours later, but otherwise adopts a relatively restrained posture to Iranian retaliation. Iran responds with largely ineffectual ballistic missile attacks. It also pushes Hizbullah and Hamas to attack Israel, although these are largely deterred and only engaged in limited actions. The US stands by Israel, but signals its desire for deescalation. Unable to inflict much direct damage on Israel, Iran begins to consider military action in the Gulf against US allies and Straits of Hormuz. The wargame only covered the first 48 hours following a strike, and concluded with Iran’s nuclear program having been set back 3 years, but no end in sight to conflict.

Comments: The commissioning editor of the Dispatches documentary on the wargame is quoted by the Times of Israel as saying  he was ”terrified” to see that the “Israelis thought it could be so easy, that they could get away with it with relatively low levels of casualties.” I suspect the INSS has it right in highlighting Hizbullah and especially Hamas reluctance to get involved in a major military confrontation with Israel, although Tehran has far more leverage over its Lebanese proxy than it does its somewhat estranged Palestinian ally. In the game the Iranians were reluctant to escalate the conflict to involve the US, which is probably (but not certainly) the case too. However, the wargame only covered four days, and certainly didn’t address the longer-term potential for escalation as the two sides engage in tit-for-tat retaliation.

Reported outcome: Two major Israeli air attacks succeed in destroying much of Iran’s nuclear infrastructure, but Tehran fires several salvoes of ballistic missiles at Israel in retaliation and publicly commits to redoubling its nuclear research and development efforts. The international community, dismayed by the prospects of a long Israeli bombing campaign, increasingly presses for an end to hostilities. Frustrated by Iranian response, Israel decides to escalate pressure through semi-covert attacks against key Iranian economic infrastructure.

Comments: The simulation was based on modified version of the commercial wargame Persian Incursion, with additional rules to address the possibility of an Israeli strike via Syrian airspace as well as an option for Hizbullah attacks against Israel (although neither of these actually occurred in the game).

Comments: Play-test and review of the commercial solitaire wargame Target: Iran, which appeared in Modern Warfare magazine in March/April 2014. As the review notes, the game is very playable, but not a high-fidelity simulation.

Reported outcome: Israel could do little to influence the outcome of the simulated deal once it had been reached. To ease Israeli concerns, the US issued Israel with a side-letter providing guarantees should Iran renege on the deal.

Comments: The simulation reflects concerns that the US and EU do not perceive the Iranian nuclear threat in the same way as Israel. The simulation reportedly identified Russia as a potential spoiler of such a deal, although the reasons offered for this were not entirely convincing.

Professor, Department of Political Science, McGill University.
View all posts by Rex Brynen →
This entry was posted in Strategy and Policy and tagged Iran, Israel. Bookmark the permalink.